My Ninilchik Swoncho is finished and I love love love it. I knitted in my favourite Skein Queen colours and it has had a lot of wear over these chilly winter months.

I used Skein Queen’s Crush DK. Being superwash wool, it did make the colour work a bit trickier but look at those colours, definitely worth the slight slippy nature! Nettle and Hermitage have long been my two favourite shades (I already have socks in the Crush 4ply) so I couldn’t resist doing my Swoncho with these, pairing them with Biscuit Town and Chesil Beach. Knitting with Skein Queen is a real pleasure, her colours are magic, just beautiful stitch after stitch.

The pattern by Caitlin Hunter had been on my brain ever since it was released and having seen many amazing Swonchos around the word, it was great to see so many different examples of colour choice. I changed the colourwork pattern very slightly, moving the colours around a bit to make them evenly used throughout and to make sure there weren’t too many places where the Biscuit Town and Chesil Beach were next to each other as the contrast between them wasn’t so striking. My gauge was small which is what I wanted. It means the colourwork is finished just at the crook of my elbow so I don’t have to push them up to be able to move my arms. I like how high it sits on my neck and flow over my shoulders into the boxy body. Once the fun colourwork is finished the body does feel like a bit of a slog just because of the number of stitches but really it’s such a short depth it was over in no time. I *still* haven’t weighed my leftovers but I used just under 3 skeins of Biscuit Town (the pattern called for 4) and less than a skein of each of the contrast colours.

And here it is! As mentioned above it has had a lot of wear already and I love it… 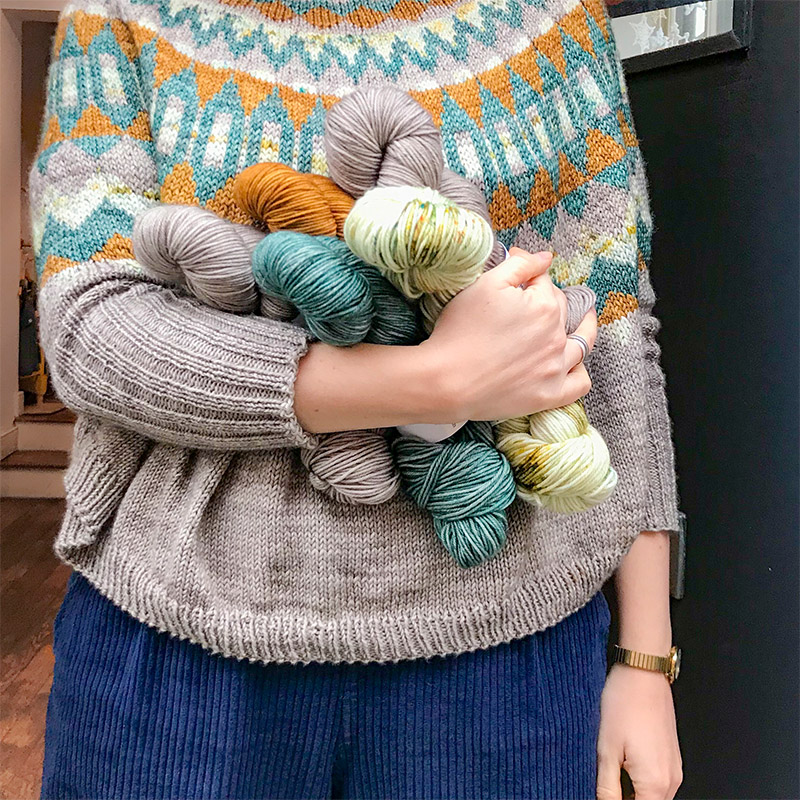 One Response to “Completed Project – Swoncho”

Leave a Reply to Emily Click here to cancel reply.

YAK – A Yarn Shop for Wool and Knitting Supplies UK © 2020. All Rights Reserved.